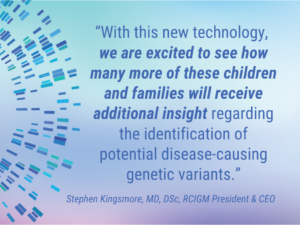 HiFi Sequencing will be used on a cohort of rare disease cases with the aim to identify numerous variants, both small and structural, that are not readily detectable by short-read sequencing

Pacific Biosciences of California, Inc. (Nasdaq: PACB)(“Pacific Biosciences” or “PacBio”), a leading provider of high-quality, long-read sequencing platforms, and Rady Children’s Institute for Genomic Medicine (RCIGM), a mission-driven, non-profit seeking to save lives and improve outcomes for patients, clinicians and families, shared today that they are collaborating on a study which aims to identify potential disease-causing genetic variants and increase the solve rates of rare diseases.

“PacBio HiFi sequencing can identify numerous variants, both small and structural that are not readily detectable by SRS,” said Matthew Bainbridge, Principal Investigator, and Associate Director of Clinical Genomics at RCIGM. “We sequenced this cohort of patients to 10-30X depth of coverage using Pacific Biosciences HiFi long-read technology to assess whether there was an increase in the identification of these variants. We are very pleased by the preliminary results delivered in this collaboration with the team at PacBio.”

It is estimated that as many as 25 million Americans — approximately 1 in 13 people — are affected by a rare, and often undiagnosed condition. In rare disease studies, conventional techniques for whole-genome and whole-exome analysis based on SRS typically led to identification of a causal variant in less than 50% of cases. Utilizing PacBio’s Single Molecule, Real-Time (SMRT®) Sequencing technology to generate highly accurate long-reads, known as HiFi reads, clinical researchers have demonstrated that they can detect disease-causing structural and small variants missed by short-read sequencing platforms. This study is designed to evaluate the rate at which HiFi sequencing identifies overlooked causal variation.

“It is an honor to collaborate with the innovative pediatric translational researchers at RCIGM to bring HiFi Sequencing data to bear on some of their most difficult cases of rare pediatric disease, and hopefully give individuals and families answers regarding potential underlying genetic variants, which may ultimately provide healthcare providers with insights to end their diagnostic odysseys,” said Christian Henry, CEO and President at PacBio.

“We’ve been aware that there’s a subset of seriously ill babies and children who don’t receive a diagnosis with current sequencing methods, but based on their symptoms, we’re fairly certain that they have an underpinning genetic disease,” said Stephen Kingsmore, MD, DSc, President and CEO of Rady’s Children’s Institute for Genomic Medicine. “With this new technology, we are excited to see how many more of these children and families will receive additional insight regarding the identification of potential disease-causing genetic variants.”